Bill C-15: An Act respecting the United Nations Declaration on the Rights of Indigenous Peoples 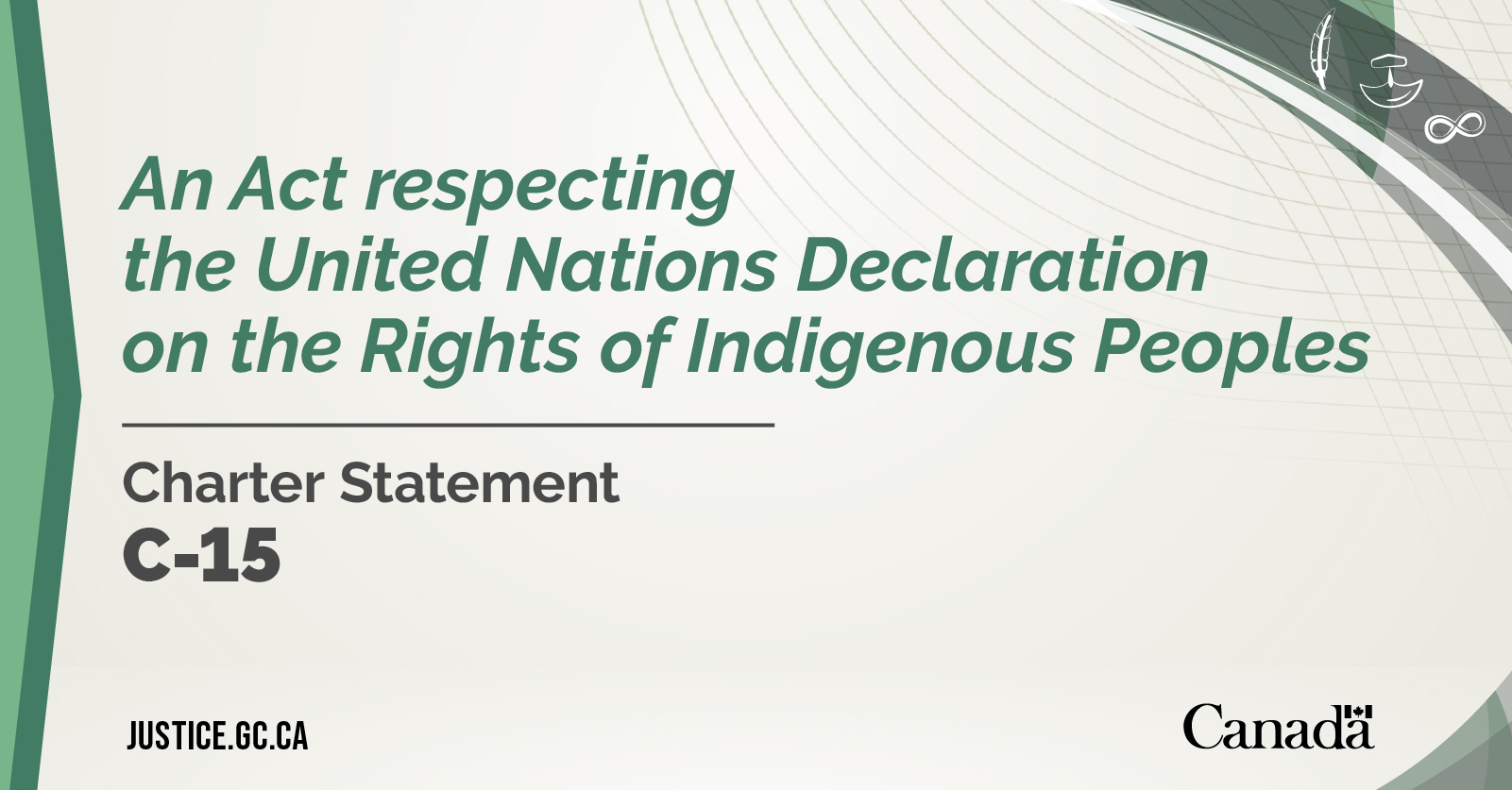 The Minister of Justice has examined Bill C-15, An Act respecting the United Nations Declaration on the Rights of Indigenous Peoples for any inconsistency with the Charter pursuant to his obligation under section 4.1 of the Department of Justice Act. This review involved consideration of the objectives and features of the Bill.

What follows is a non-exhaustive discussion of the ways in which Bill C-15 potentially engages the rights and freedoms guaranteed by the Charter. It is presented to assist in informing the public and Parliamentary debate on the Bill.

The Bill supports implementation of the UN Declaration on the Rights of Indigenous Peoples in Canada by requiring that the Government of Canada, in consultation and cooperation with Indigenous peoples, takes measures to achieve the objectives of the Declaration, including preparing and implementing an action plan and taking necessary measures to ensure that the laws of Canada are consistent with the Declaration.

Clause 4 provides that the purpose of the Act is to affirm the Declaration as having application in Canadian law as a universal international human rights instrument and to provide a framework for the Government of Canada`s implementation of the Declaration.

Clause 5 provides that the Government of Canada must, in consultation and cooperation with Indigenous peoples, take all measures necessary to ensure that the laws of Canada are consistent with the Declaration.

Clause 6 provides that the Minister must, in consultation and cooperation with Indigenous peoples and with other federal ministers, prepare and implement an action plan to achieve the objectives of the Declaration, including accountability measures with respect to implementation of the Declaration. The action plan must also include measures to address injustices and eliminate all forms of violence and discrimination against Indigenous peoples as well as promote mutual respect, understanding, and good relations. Finally, the action plan must include measures related to monitoring the implementation of the plan, and reviewing and amending the plan, and must be made public after the Minister causes it to be tabled in each House of Parliament as soon as practicable after it has been prepared in no more than three years.

Section 15(1) of the Charter protects equality rights. It provides that every individual is equal before and under the law and has the right to the equal protection and equal benefit of the law without discrimination, including on the basis of race or ethnic origin. Equality entails the promotion of a society in which all are secure in the knowledge that they are recognized at law as equally deserving of concern, respect, and consideration.

The Bill aims to implement the Declaration in keeping with rights to equality and non-discrimination, which the Declaration itself recognizes as fundamental rights. This promotes the core aims and values that underpin section 15 of the Charter and human rights more generally, including by helping to combat prejudice and eliminate systemic discrimination against Indigenous peoples. In light of historic injustices faced by Indigenous peoples, the Bill adopts an approach based on good faith, justice, democracy, equality and non-discrimination, good governance and respect for human rights and the constitutional protection of existing Aboriginal and treaty rights. Both the Truth and Reconciliation Commission and the Inquiry on Missing and Murdered Indigenous Women and Girls have called upon government to adopt and implement the Declaration as the framework for reconciliation. This Bill proposes a legislated framework for advancing self-determination, self-government, inclusion, economic participation, and equality for Indigenous peoples through the progressive alignment of federal laws with the Declaration over time.

The Bill would require the Government of Canada, in consultation and cooperation with Indigenous peoples, to implement the Declaration by ensuring that federal laws are consistent with the Declaration over time and through implementation of an action plan to achieve its objectives. The Bill contemplates taking into account the diversity of Indigenous peoples, including the diverse identities, cultures, languages, customs, practices, rights and legal traditions of First Nations, the Inuit and the Métis, as part of carrying out the obligations set out in the Bill. The Bill would also require implementation measures to combat prejudice and eliminate all forms of violence and discrimination, including systemic discrimination, against Indigenous peoples and Indigenous elders, youth, children, women, men, persons with disabilities and gender-diverse persons and two-spirit persons.

The Bill could be considered to distinguish based on race or ethnicity in a way that engages the protection of subsection 15(1) of the Charter because it provides Indigenous peoples with the unique benefit of a process to update federal laws over time consistent with the Declaration. This objective of the Bill is in keeping with the purpose of section 15 to promote substantive equality and prevent discrimination against disadvantaged groups.

Subsection 15(2) of the Charter clarifies that subsection 15(1) allows for laws, programs, or activities that have as their object the amelioration of conditions of disadvantaged individuals or groups, including those that are disadvantaged because of race or ethnic origin. The Bill is aimed in part at redressing a long history of colonialism, racism and discrimination experienced by Indigenous peoples in Canada. The Bill seeks to respond to some of the particular disadvantages experienced by Indigenous peoples by requiring measures to ensure that federal laws are consistent with the human rights standards reflected in the Declaration, including the right to self-determination, non-discrimination, and equality. Further, by requiring an approach to the implementation of the Bill that takes account of diversity across and within Indigenous peoples, the Bill aligns with the objectives of section 15.