Bill C-19: An Act to amend the Canada Elections Act 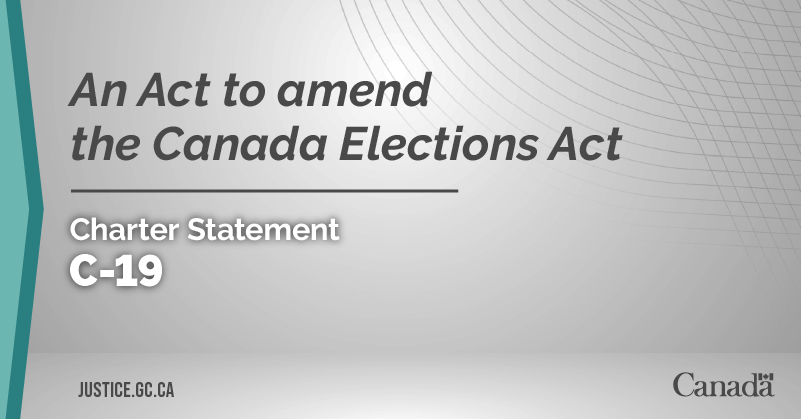 The Minister of Justice has examined Bill C-19, An Act to Amend the Canada Elections Act (COVID-19 response), for any inconsistency with the Charter pursuant to his obligation under section 4.1 of the Department of Justice Act. This review involved consideration of the objectives and features of the Bill.

What follows is a non-exhaustive discussion of the ways in which Bill C-19 potentially engages the rights and freedoms guaranteed by the Charter. It is presented to assist in informing the public and Parliamentary debate on the Bill.

Bill C-19 would enact a new Part 22 to the Canada Elections Act (the “CEA”), which would provide for temporary rules to assist in ensuring that any general election, as well as any by-election, held during the COVID-19 pandemic can be administered in the safest way possible for electors and election workers.

The measures proposed in this Bill include the following. First, this Bill would grant additional authority for the Chief Electoral Officer (CEO) to adapt provisions of the CEA for the purpose of ensuring the health and safety of electors and election workers if an emergency, an unusual or unforeseen circumstance, or an error make it necessary to do so. The Charter requires that use of this authority balance the reasons for adaptation of the CEA with its effects on rights or freedoms protected by the Charter, including section 3 (the right to vote). However, this general conferral of discretionary authority does not give rise to any effects on Charter rights and freedoms.

Second, this Bill would enact certain measures to facilitate voting in institutions where seniors or persons with a disability reside (referred to in this statement as “long-term care institutions”). Third, this Bill would provide for a polling period of three consecutive days consisting of a Saturday, Sunday and Monday, and would temporarily modify certain rules throughout the CEA to accommodate this expanded polling period. Finally, this Bill would provide for new measures to facilitate access to voting by special ballot, and establish new prohibitions aimed at preventing the misuse of secure reception boxes.

These measures would be repealed six months after the CEO publishes a notice in the Canada Gazette to confirm that the temporary rules enacted by the Act are no longer required to ensure the safe administration of an election in the context of the COVID-19 pandemic.

The Bill would allow returning officers to establish a polling division in a given sector or floor of a long-term care institution. This Bill would also provide 13 days prior to the first day of the polling period during which returning officers could work with long-term care institutions to ensure the vote is administered safely to residents. However, the total number of opening hours at these polling stations would be the same as polling stations located outside these institutions. These measures recognize that long-term care facilities have been severely and negatively impacted by the pandemic, and it will support a safe vote for electors residing in these facilities, in particular those who may be in quarantine with COVID-19.

Section 3 provides that every Canadian citizen has the right to vote in an election of members of the House of Commons and “to be qualified for membership therein”. It protects the right of each citizen to play a meaningful role in the electoral process.

The following considerations support the consistency of these measures with section 3 of the Charter. The measures proposed in this Bill will help ensure that individuals residing in long-term care institutions are able to exercise their right to vote safely, taking into account the unique challenges facing long-term care institutions during the COVID-19 pandemic and the fact that measures to administer the vote in these institutions may need to be rapidly adapted to respond to evolving public health conditions at any given time. Moreover, these measures would have no negative impact on the rights of other citizens to exercise their right to vote.

The implementation of these measures would be subject to the discretion of returning officers and need to be exercised in accordance with the Charter.

Subsection 15(1) of the Charter protects equality rights. It provides that every individual is equal before and under the law and has the right to the equal protection and equal benefit of the law without discrimination on various grounds, including age and mental or physical disability.

Similar to section 3, this Bill potentially engages section 15 of the Charter because, by allowing for certain measures to be put in place to facilitate voting specifically for seniors and persons with a disability who reside in long-term care institutions, there is a different impact for those groups who are more likely to be older and/or have a disability.

These measures would promote the aims and values of the Charter’s equality rights. A central aim of equality, particularly in relation to persons with disabilities, is to ensure reasonable accommodation by modifying services in order to remove and prevent barriers to their equal participation in society. In addition, achieving substantive equality for disadvantaged groups often requires making distinctions. Subsection 15(2) of the Charter clarifies that subsection 15(1) does not preclude laws, programs or activities that have as their object the amelioration of conditions of disadvantaged individuals or groups, including those that are disadvantaged because of age or mental or physical disability. These measures would assist in ensuring that voters are able to exercise their right to vote on an equal basis with others.

This Bill would provide for a three-day polling period, consisting of a Saturday, Sunday and Monday in order to facilitate physical distancing and respect public health limits on the number of individuals permitted in enclosed spaces at a given time. Maintaining the Monday as one of the three polling days would also help to ensure that individuals who are limited in their ability to visit polling stations on weekends due to childcare responsibilities or because of reduced public transit schedules are still able to exercise their right to vote. These polling stations would be open for 8 hours on both the Saturday and Sunday, and 12 hours on the Monday. This Bill would also temporarily remove the CEO’s authority to recommend an alternate day for the polling date if the CEO is of the opinion that the typical Monday polling date is unsuitable, including because it conflicts with a day of cultural or religious significance.

Section 2(a) and 15 – Freedom of religion and equality rights

Section 2(a) provides that everyone has freedom of conscience and religion. This guarantee protects a person’s sincerely held practices or beliefs that have a connection with religion. A law or government action that interferes with the ability to act in accordance with such practices or beliefs may engage section 2(a), if the interference is more than trivial or insubstantial. As noted above, section 15 protects equality rights, including on the basis of religion.

The following considerations support the consistency of the proposed measures with both sections 2(a) and 15 of the Charter. A three-day polling period provides religious observers with additional options within the designated polling period to participate in the electoral process without religious restrictions, in addition to advance polls and special ballot options.

The following considerations support the consistency of these measures with section 3 of the Charter. The shift from a single polling day to a three-day polling period would enhance the ability of citizens to meaningfully participate in the electoral process, as it would provide Canadians with increased opportunities to vote in person while supporting public health measures by minimizing the possibility of larger groups of people voting on one day.

Temporary modification of existing measures in the CEA

The proposed new Part 22 of the CEA would include a number of rules to temporarily replace portions Part 1-21 of the CEA in order to accommodate the shift to a three-day polling period.

Section 2(b) provides that everyone has freedom of thought, belief, opinion and expression, and includes freedom of the press and other media of communication. Section 2(b) has been broadly interpreted as encompassing any activity or communication, aside from violence or threats of violence, that conveys or attempts to convey meaning.

The Bill would adjust the existing prohibition against the use of loudspeakers within hearing distance of a polling station for the purpose of promoting or opposing a political party that is listed on the ballot under the name of a candidate or the election of a candidate, so that this prohibition would apply during the entirety of the three-day polling period. This prohibition potentially engages section 2(b) of the Charter because it imposes restrictions on the ability of individuals to engage in political expression.

The following considerations support the consistency of this measure with section 2(b) of the Charter. The restriction on the use of loudspeakers is limited to specific content, dates and locations. This restriction helps ensure that polling stations – and their immediate vicinity – are maintained as non-partisan zones and that electors can exercise their right to vote without interference. It also reaffirms the non-partisan nature of election administration in Canada.

The Bill would adjust the application of sections 323 and 328 of the CEA, which respectively prohibit the transmission of election advertising and new election survey results on polling day, such that these prohibitions would only apply on the last day of the proposed polling period.

This Bill would provide that the prohibitions set out in the CEA which currently apply on a polling date are extended to apply to the entirety of the polling period. This legislation would also introduce new prohibitions aimed at preventing the misuse of secure reception boxes, including attempts to tamper with a secure reception box installed by a returning officer or with its contents, as well as the installation, by anyone who is not acting under the authority of the CEO or of a returning officer, of a secure reception box for the reception of special ballots. Like other prohibitions currently found in the CEA, contravention of one of these prohibitions would constitute an offence. Punishment for someone who is found guilty of one of these offences ranges from fines to possible imprisonment, depending on the offence. However, this Bill does not alter any of the provisions in the CEA that govern possible punishment associated with contravention of a prohibition.