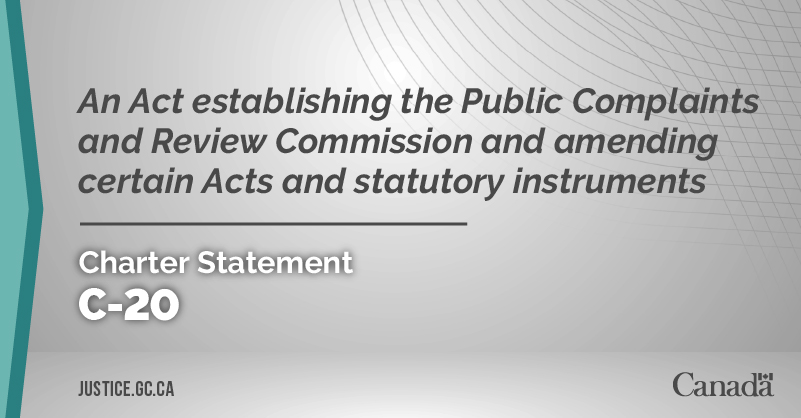 The Minister of Justice has examined Bill C-20, An Act establishing the Public Complaints and Review Commission and amending certain Acts and statutory instruments, for any inconsistency with the Charter pursuant to his obligation under section 4.1 of the Department of Justice Act. This review involved consideration of the objectives and features of the Bill.

What follows is a non-exhaustive discussion of the ways in which Bill C-20 potentially engages the rights and freedoms guaranteed by the Charter. It is presented to assist in informing the public and Parliamentary debate on the Bill. It does not include an exhaustive description of the entire bill, but rather focuses on those elements relevant for the purposes of a Charter statement.

Bill C-20 proposes to establish the Public Complaints and Review Commission (“the Commission”), an enhanced independent review and complaints body for the Canada Border Services Agency (“CBSA”) and the Royal Canadian Mounted Police (“RCMP”). This enhanced body would replace the existing Civilian Review and Complaints Commission, which is currently the review body for the RCMP.

The Bill would provide the Commission with powers to review specified activities of the CBSA that are not related to national security, and to investigate complaints concerning CBSA level of service or the conduct of any CBSA employee, including complaints relating to the treatment of detained persons and conditions of detention. The Bill would also amend the Canada Border Services Agency Act to require the CBSA to investigate serious incidents involving officers or employees of the Agency.

The Bill would provide the Commission with the power to access any information in the possession of the RCMP or CBSA, or under the agencies’ control, that the Commission considers relevant to the exercise of its powers or the performance of its duties and functions, subject to certain exceptions. These exceptions are specified in the Bill: for example, the Commission is not entitled to have access to information that is a Cabinet confidence or commercial information that Canada has committed to keep confidential under an international agreement.

Section 8 of the Charter protects against “unreasonable” searches and seizures. The purpose of section 8 is to protect persons against unreasonable intrusion into a reasonable expectation of privacy. A search or seizure that intrudes upon a reasonable expectation of privacy will be reasonable if it is authorized by a law, the law itself is reasonable (in the sense of striking an appropriate balance between privacy interests and the state interest being pursued), and it is carried out in a reasonable manner. Because the powers to access and use information have the potential to interfere with privacy interests they may engage section 8 of the Charter.

The following considerations support the consistency of the provisions with section 8 of the Charter. Their purpose is to enable the Commission to obtain information in support of its mandate to provide a public accountability mechanism for the RCMP and CBSA. The provisions are tailored to limit any potential interference with privacy interests to what is relevant for the Commission to carry out its review and complaints investigation functions. Information collected by the Commission may only be used for the purposes of a review or complaint and would not be used to further criminal investigations.

The Bill would set out the Commission’s powers to institute a public hearing regarding a complaint as well as a framework to facilitate the protection of sensitive information in the course of a public hearing.

Section 2(b) of the Charter provides that everyone has freedom of thought, belief, opinion and expression, including freedom of the press and other media of communication. It includes the “open court principle” whereby members of the public have a right to receive information pertaining to judicial proceedings.Because the Bill would provide that the Commission’s hearings may be conducted in the absence of the public and parties in certain circumstances, it may engage section 2(b) of the Charter.

The following considerations support the consistency of this aspect of the Bill with the Charter. Like other Charter rights, the open court principle is not absolute and may be limited to advance pressing objectives. Protecting sensitive information, such as the kinds of information noted above, is a recognized and important public interest. The proposed power would be discretionary and the Commission would exercise it on a case by case basis. The Commission would have the responsibility for deciding whether it is appropriate for all or part of a particular hearing to be held in the absence of the public and parties. The Commission would need to exercise its power reasonably, in line with the rules set out in the Bill and in a manner consistent with the Charter.

Powers of the Commission and Offences

The Bill would provide the Commission with the power to summon and enforce the attendance of witnesses in relation to complaints which are before it, including the power to compel testimony and require the production of documents and other evidence relevant for the full investigation, hearing and consideration of a complaint.

The following considerations support the consistency of these provisions with the Charter. The ability to summon witnesses is a necessary tool for the Commission to effectively investigate complaints from the public. Where a witness is compelled to give testimony or other evidence, the Bill prohibits the use of that testimony or evidence in later proceedings against the individual, except in proceedings regarding perjury, and to inform certain decisions by the Chairperson of the Commission.

In reviewing the proposed powers and offences, the Minister has not identified any potential inconsistencies with the principles of fundamental justice under section 7. The scope of the powers and offences is tailored to their objectives, and upon conviction, a judge will have discretion to impose a fit and appropriate sentence.

Section 2(b) of the Charter is based on important values, such as promotion of the search for truth and participation in social and political decision-making. Expression taking the form of violence or directed towards violence is not protected by the Charter. Freedom of expression may be engaged by the proposed offences dealing with insulting or threatening language, or conduct that is intended to dissuade witnesses from testifying, because these offences may prohibit forms of communication.

The following considerations support the consistency of these proposed offences with section 2(b) of the Charter. The purpose of the offences is to ensure the proper administration of the Commission’s hearings. The narrow category of communications that may be caught by the proposed offences would not promote the values underlying freedom of expression and could be viewed as at the periphery of section 2(b)’s protection. Such communications undermine respect for the authority and function of the Commission in conducting hearings into complaints.