Bill C-22: An Act to amend the Criminal Code and the Controlled Drug and Substances Act 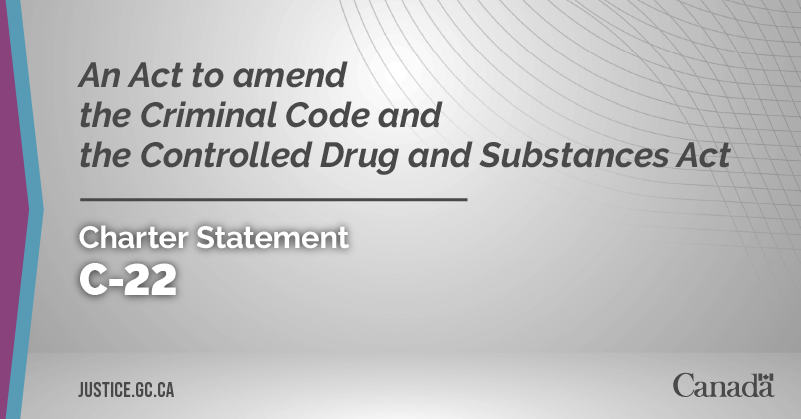 The Minister of Justice has examined Bill C-22, An Act to amend the Criminal Code and the Controlled Drugs and Substances Act, for any inconsistency with the Charter pursuant to his obligation under section 4.1 of the Department of Justice Act. This review involved consideration of the objectives and features of the Bill.

What follows is a non-exhaustive discussion of the ways in which Bill C-22 potentially engages the rights and freedoms guaranteed by the Charter. It is presented to assist in informing the public and Parliamentary debate on the Bill.

Bill C-22 would make a number of amendments to the Criminal Code and the Controlled Drugs and Substances Act that seek to fulfill the Government of Canada’s commitment to address systemic inequities, including the overrepresentation of Indigenous Peoples, Black, and marginalized Canadians, in the criminal justice system. There are three areas of proposed reform in the Bill: (1) the repeal of all mandatory minimum penalties of imprisonment (MMPs) for offences under the Controlled Drugs and Substances Act and the repeal of MMPs for a tobacco offence and some offences involving the possession or use of firearms under the Criminal Code; (2) changes to increase the availability of conditional sentences under the Criminal Code; and, (3) changes to the Controlled Drugs and Substances Act to promote the use of diversion for simple possession of drugs.

MMPs limit judicial discretion in sentencing and require a judge to impose a sentence of imprisonment that is equal to or higher than a specified minimum length on an offender upon conviction.

Protection against cruel and unusual treatment or punishment (section 12)

Section 12 of the Charter guarantees the right not to be subjected to any cruel and unusual treatment or punishment. In the context of sentencing, section 12 prohibits grossly disproportionate punishments. MMPs reduce judicial discretion to impose sentences that are proportionate to the gravity of the offence and degree of responsibility of the offender. As such, and depending on the circumstances MMPs have the potential to lead to sentences that may be viewed as grossly disproportionate. The proposed amendments to repeal MMPs for select offences would have the effect of reducing this potential by restoring judicial discretion to fashion a sentence that is fit and proportionate in the circumstances.

Conditional sentences encourage the use of principles of restorative justice in sentencing, and are a tool to address the over incarceration of Indigenous offenders and to reduce overreliance on incarceration, where appropriate. A conditional sentence allows an offender to serve their term of imprisonment in the community under strict conditions, such as confinement to house, curfew, treatment, and/or restrictions on owning/possessing/carrying a weapon, while furthering the sentencing goals of denunciation and deterrence. In order for a conditional sentence to be imposed, several requirements set out in section 742.1 of the Criminal Code must be met: (1) that the court is satisfied that a conditional sentence is consistent with the fundamental purposes and principles of sentences and would not endanger the safety of the community, (2) that the offender is sentenced to a term of imprisonment of less than two years and, (3) that the offender must not have been convicted of an offence for which there is a minimum term of imprisonment.

Right to liberty (section 7 of the Charter)

The following considerations support the consistency of the limited new restrictions on the availability of conditional sentences with section 7. The amendments are tailored to prohibit conditional sentences for only specific serious offences: the offences of advocating genocide, torture and attempted murder. The amendments do not otherwise limit judicial discretion to impose a sentence that is fit and proportionate in the circumstances.