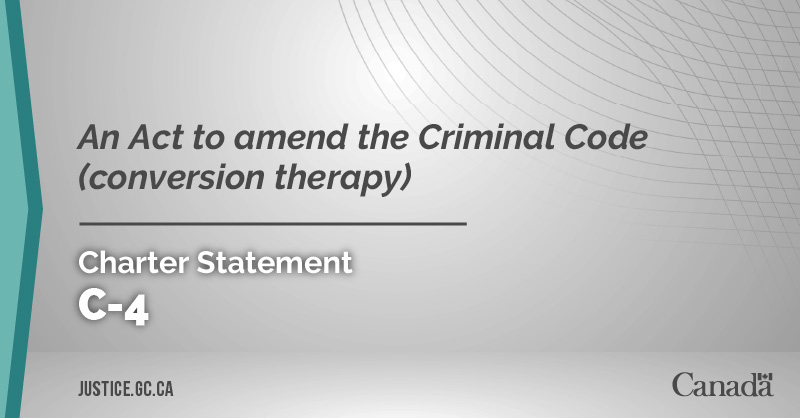 The Minister of Justice has examined Bill C-4, An Act to amend the Criminal Code (conversion therapy), for any inconsistency with the Charter pursuant to his obligation under section 4.1 of the Department of Justice Act. This review involved consideration of the objectives and features of the Bill.

What follows is a non-exhaustive discussion of the ways in which Bill C-4 potentially engages the rights and freedoms guaranteed by the Charter. It is presented to assist in informing the public and Parliamentary debate on the Bill.

The Bill would enact new offences to prohibit:

Section 15(1) of the Charter protects equality rights. It provides that every individual is equal before and under the law and has the right to the equal protection and equal benefit of the law without discrimination on various grounds, which have been found to include the ground of sexual orientation.

The Bill would promote the aims and values of the Charter’s equality rights. Equality entails the promotion of a society in which all are secure in the knowledge that they are recognized at law as equally deserving of concern, respect, and consideration. The Bill would discourage and denounce harmful practices and treatments that are based on myths and stereotypes about LGBTQ2 people. These include myths and stereotypes that the sexual orientation, gender identity or gender expression of LGBTQ2 people are undesirable conditions that can or should be changed.

Section 2(a) provides that everyone has freedom of conscience and religion. The freedom of religion guarantee protects sincerely held practices or beliefs that have a connection with religion. A law or government action that interferes with the ability to act in accordance with such practices or beliefs in a way that is more than trivial or insubstantial will engage section 2(a). Because the prohibition on causing another person to undergo conversion therapy may affect the ability of individuals to engage in practices that have a connection with their own sincerely held religious beliefs, it has the potential to engage the freedom of religion.

Section 2(b) provides that everyone has freedom of thought, belief, opinion and expression. Section 2(b) has been interpreted broadly to encompass any activity or communication, aside from violence or threats of violence, that conveys or attempts to convey meaning. It protects the rights of both speakers and listeners. Because the offence of providing conversion therapy would prohibit discussions between providers and recipients of conversion therapy, it engages section 2(b).

Because the proposed offence of causing another person to undergo conversion therapy carries the possibility of imprisonment, it engages the right to liberty. Liberty and security of the person also encompass the right to make fundamental personal choices – and to control one’s bodily and psychological integrity – free from state interference. To the extent that the offence would prevent individuals who are capable of making their own treatment decisions and who wish to obtain conversion therapy from doing so, it potentially engages the right to security of the person and the broader right to liberty.

Any effects that the offence may have on Charter rights are tailored to the objective of preventing the harms associated with conversion therapy, as described above. The proposed offence would be limited to “practices, treatments or services”, all of which imply an established or formalized intervention. It would not criminalize conversations in which a person expresses an opinion on sexual orientation, gender identity or gender expression, unless that conversation forms part of an intervention designed to make a person heterosexual or cisgender. Interventions that support an individual’s exploration and development of their own identity would not be prohibited, provided that they are not based on an assumption that a particular sexual orientation, gender identity or gender expression is to be preferred over another.

Prohibiting the promotion or advertising of conversion therapy

Prohibiting the promotion and advertising of conversion therapy would limit the freedom of expression under section 2(b), which encompasses advertising and other expression that is done for commercial purposes. To the extent that the prohibition on promotion and advertising may limit the ability of individuals to engage in practices that have a connection with their own sincerely held religious beliefs, it has the potential to engage the freedom of religion under section 2(a). Because the offence is punishable by imprisonment, it also engages the right to liberty under section 7.

The considerations discussed above in relation to the offence of causing another person to undergo conversion therapy also support the consistency of the promotion and advertising offence with the Charter. In addition, the promotion and advertising offence would further the legislative objectives by reducing the presence of discriminatory public messaging that sexual orientation, gender identity or gender expression can or should be changed. This would protect invdividuals who may be vulnerable to such messaging and the dignity of LGBTQ2 people more broadly.

Section 6 protects mobility rights. It encompasses the right of Canadian citizens to enter, remain in and leave Canada. The Bill would prohibit removing a child under the age of 18 from Canada with the intention that they undergo conversion therapy outside Canada. It would do so by amending the existing offence under s. 273.3 of the Criminal Code, which prohibits the removal of a child from Canada for specified purposes. Because the new prohibition may restrict the ability of children and mature minors to leave Canada for the purpose of obtaining conversion therapy abroad, it potentially engages the right to leave Canada under section 6.

The following considerations support the consistency of the offence with the Charter. The offence would not completely prohibit anyone from leaving Canada. It would only prohibit the removal of a child from Canada in circumstances where the child was being removed for the purpose of doing something that would constitute an offence if it were committed inside Canada. Ensuring that the prohibition on conversion therapy cannot be circumvented by removing a child to undergo conversion therapy outside Canada responds to the clear harms that conversion therapy poses to children.