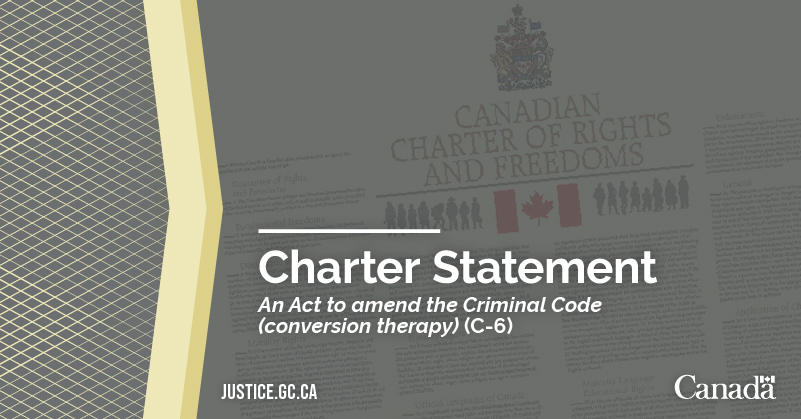 The Minister of Justice has examined Bill C-6, An Act to amend the Criminal Code (conversion therapy), for any inconsistency with the Charter pursuant to his obligation under section 4.1 of the Department of Justice Act. This review involved consideration of the objectives and features of the Bill.

What follows is a non-exhaustive discussion of the ways in which Bill C-6 potentially engages the rights and freedoms guaranteed by the Charter. It is presented to assist in informing the public and Parliamentary debate on the Bill.

Bill C-6 would amend the Criminal Code to prohibit certain activities that relate to “conversion therapy”, which is defined as practices, treatment or services designed to change an individual’s sexual orientation to heterosexual or gender identity to cisgender or to reduce non-heterosexual sexual attraction or sexual behaviour. Specifically, the Bill would enact new offences to prohibit:

The Bill would also authorize courts to order the seizure and forfeiture of advertisements for conversion therapy or order their removal from computer systems (“take-down provisions”).

Overall, the Bill would promote the human dignity and equality of all Canadians, including Lesbian, Gay, Bisexual, Transgender, Queer, Two-Spirit (LGBTQ2) people and the LGBTQ2 community. Arising from fundamental social and ethical considerations, the Bill would discourage and denounce practices and treatments that cause psychological harm to LGBTQ2 people.

The Bill also potentially engages sections 2(a) (freedom of religion), 2(b) (freedom of expression), 6 (mobility rights), 7 (life, liberty and security of the person), section 8 (search and seizure) and 15 (equality) of the Charter.

Section 15(1) of the Charter protects equality rights. It provides that every individual is equal before and under the law and has the right to the equal protection and equal benefit of the law without discrimination on various grounds, which have been found to include the ground of sexual orientation.

The Bill would promote the aims and values of the Charter’s equality rights. Equality entails the promotion of a society in which all are secure in the knowledge that they are recognized at law as equally deserving of concern, respect, and consideration. The Bill would discourage and denounce harmful practices and treatments that are based on myths and stereotypes about LGBTQ2 people. These include myths and stereotypes that the sexual orientation or gender identity of LGBTQ2 people are undesirable and temporary conditions that can and should be changed.

Freedom of Religion (Section 2(a))

Section 2(a) provides that everyone has freedom of conscience and religion. This guarantee protects a person’s sincerely held practices or beliefs that have a connection with religion. A law or government action that interferes with the ability to act in accordance with such practices or beliefs may engage section 2(a), if the interference is more than trivial or insubstantial. Section 2(a) is potentially engaged where the proposed offences apply to individuals engaging in practices that have a connection with their own sincerely held religious beliefs.

Freedom of Expression (Section 2(b))

Section 2(b) provides that everyone has freedom of thought, belief, opinion and expression. This freedom encompasses the freedom to convey or attempt to convey meaning, with the exception of violence and threats of violence. Section 2(b) is engaged by the proposed offence against advertising conversion therapy services, by the take-down provisions and by the application of the proposed offences to discussions between a conversion-therapy provider and recipient of conversion therapy.

Section 6 protects mobility rights. It encompasses the right of Canadian citizens to enter, remain in and leave Canada. The proposed offence of removing a child from Canada to undergo conversion therapy abroad potentially engages the right to leave Canada under section 6.

Life, Liberty and Security of the Person (Section 7)

Section 7 protects against the deprivation of an individual’s life, liberty and security of the person unless done in accordance with the principles of fundamental justice. Because the proposed offences all carry the possibility of imprisonment, they have the potential to deprive an individual of their liberty. “Life, liberty and security of the person” may also include certain inherently private choices that go to the core of what it means to enjoy individual dignity and independence and may include avoidance of serious state-imposed psychological harm. Section 7 is potentially engaged in respect of a person who is capable of making their own treatment decisions and who wishes to obtain conversion therapy, but who is prevented from doing so because of the prohibitions in the law.

Section 8 of the Charter protects against unreasonable searches and seizures. A search or seizure will be reasonable if it is authorized by law, the law itself is reasonable in that it strikes an appropriate balance between privacy interests and the state interest being pursued, and the search is carried out in a reasonable manner. As the Bill would permit a judge to order the seizure of information, it has the potential to interfere with personal privacy interests, and therefore may engage section 8.

Section 15 equality rights are potentially engaged with respect to individuals who are under the age of 18 but who are nevertheless capable of making their own treatment decisions (“mature minors”). Such individuals may wish to obtain conversion therapy but would be prevented from doing so.

The following considerations support the consistency of Bill C-6 with the Charter. Conversion therapy has been denounced by medical and psychological professionals as being ineffective and the source of harm and potential harm. Conversion therapy has resulted, or risks resulting, in harms such as distress, anxiety, depression, stigma, shame, negative self-image, a feeling of personal failure, difficulty sustaining relationships, sexual dysfunction and having serious thoughts or plans of – or attempting – suicide. Its continued existence also harms the dignity of LGBTQ2 people by perpetuating myths and stereotypes based on sexual orientation or gender identity – in particular, that the sexual orientation or gender identity of LGBTQ2 people is undesirable and can and should be changed.

Other jurisdictions, including some Canadian provinces and cities, have recognized the harms caused by conversion therapy and have taken steps to limit its practice – including through regulation of health professionals.

For the proposed offence of causing a child to undergo conversion therapy, an accused would be able to raise a defence that they were mistaken as to the age of the individual. The accused would need to point to some evidence that they took reasonable steps to ascertain the individual’s age. To convict someone, the Crown would still need to prove beyond a reasonable doubt that the accused believed the person was under the age of 18.

The proposed offences would be limited to practices, services or treatment and would therefore exclude purely private discussions between an individual struggling with their sexual orientation or gender identity and those seeking to support that individual, such as teachers, school counsellors, faith leaders, family members and friends. They would also not include services relating to an individual’s gender transition or an individual’s exploration of their identity or its development. The offences would criminalize providing conversion therapy to all children and to any adults against their will. It would also criminalize providing conversion therapy in exchange for a material benefit. The offences have thus been carefully tailored to meet the objectives of the Bill.

The take-down provisions contain detailed procedural protections for the person occupying the place where the advertising is located and would only permit its seizure when a judge issues a warrant to do so.

The proposed offences aim to deter those who would profit from conversion therapy and who would subject children and non-consenting adults to it. The Bill would thus realize significant individual and social benefits in avoiding psychological harm to individuals and harm to the dignity of LGBTQ2 people. Avoiding these harms outweighs considerations of individual autonomy and outweighs the ability to advertise and profit from an ineffective service that is harmful to the dignity of all LGBTQ2 people.