Bill C-8: An Act to implement certain provisions of the economic and fiscal update tabled in Parliament on December 14, 2021 and other measures 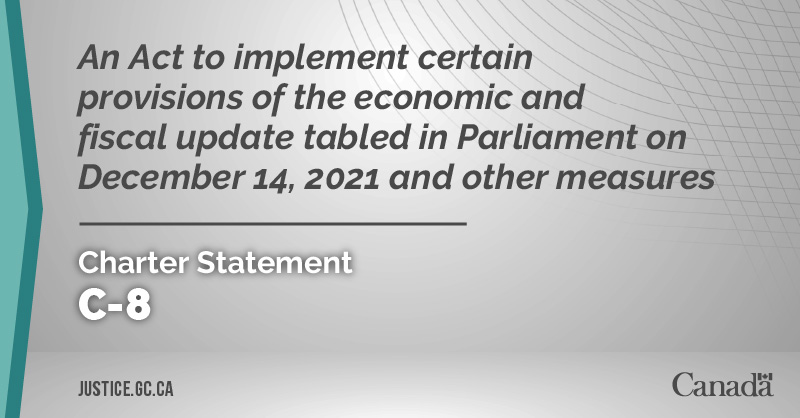 The Minister of Justice has examined Bill C-8, An Act to implement certain provisions of the economic and fiscal update tabled in Parliament on December 14, 2021 and other measures, for any inconsistency with the Charter pursuant to his obligation under section 4.1 of the Department of Justice Act. This review involved consideration of the objectives and features of the Bill.

What follows is a non-exhaustive discussion of the ways in which Bill C-8 potentially engages the rights and freedoms guaranteed by the Charter. It is presented to assist in informing the public and Parliamentary debate on the Bill.

Part 2 of Bill C-8 would enact the Underused Housing Tax Act (Act) to implement an annual tax of 1% on the value of vacant or underused residential property directly or indirectly owned by non-resident, non-Canadians. The Act sets out applicable reporting and filing requirements and rules for determining owners’ liability for the new tax. In addition, the Act includes numerous administration and enforcement provisions found in other taxation statutes to promote compliance with the statutory scheme.

Inquiry Powers of a Hearing Officer

The Act would authorize a hearing officer to make an inquiry that the Minister of National Revenue deems necessary for any purpose related to the administration and enforcement of the Act. The hearing officer would have the power to summon any witnesses to the inquiry, and to compel them to give evidence (oral or written), and produce any relevant documents or things. Any person who gives evidence or whose affairs are being investigated in the course of an inquiry would be entitled to be represented by a lawyer.

The powers to compel individuals to appear at an inquiry and to give evidence potentially engages the liberty interest. The following considerations support the consistency of these powers with section 7. The purpose of the inquiry is to support the administration and enforcement of a statute that is based upon on a self-assessment system to determine tax liability. The inquiry powers are not available for the predominant purpose of furthering a prosecution against the witness. In addition, any incriminating evidence compelled during an inquiry may not be used in another proceeding if such use would violate the principle against self-incrimination. Furthermore, both the witnesses and subjects of an inquiry would have the right to be represented by a lawyer.

The power to compel the production of documents or things at an inquiry potentially engages section 8 of the Charter. The following considerations support the consistency of this power with section 8. The type of documents or things that may be compelled must be relevant to the administration and enforcement of a tax statute in a context where privacy expectations are reduced. Furthermore, an order to produce a document or thing is not particularly intrusive, as it does not involve entry into a taxpayer’s private property to conduct a search or seizure. Similar inquiry powers that exist in other tax statutes have been upheld by the courts.

The Actwould establish several offences. These offences would penalize, among other things, the failure to file a return or to comply with an obligation or order, making or participating in the making of false or deceptive statements, and intentionally failing to pay tax as required under the Act. A general offence provision would also be created to promote compliance with the new tax scheme as a whole.

The new offence provisions could lead to a term of imprisonment, thereby engaging the liberty interest under section 7 of the Charter. As noted above, section 7 provides that any deprivation of life, liberty and security of the person must accord with the principles of fundamental justice. In reviewing the offence provisions, the Minister of Justice has not identified any potential inconsistencies of the provisions with the principles of fundamental justice under section 7.

Powers to Collect, Disclose and Use Information

The measures to collect, disclose and/or use information potentially engage section 8 of the Charter. The following considerations support the consistency of these measures with section 8. Privacy interests are diminished in the regulatory and administrative contexts. Powers to compel the production of or disclose relevant information for regulatory or administrative purposes, rather than for the purpose of investigating offences, have been upheld as reasonable under section 8. The amendments set out numerous measures to safeguard privacy interests including: a requirement for judicial authorization to compel information about unnamed persons; strict rules governing the permissible disclosure and use of confidential information; and the ability to judicially review an order to produce any evidence relating to confidential information or a requirement to provide foreign-based information.

The Act would create a number of regulatory powers analogous to those in other comparable laws. A person authorized by the Minister would be allowed to inspect the records, processes, property or premises of a person that may be relevant in determining tax obligations or entitlements, and to verify compliance with the Act. Inspectors would have the ability to require a person to give all reasonable assistance in the context of the inspection including by answering all proper questions related to the administration or enforcement of the Act. The Act would also permit authorized persons to search any building, receptacle or place – by way of a warrant – for any record or thing that may afford evidence of the commission of an offence under the Act, and to seize any such record or thing.

The proposed measures described above potentially engage section 8 of the Charter. The following considerations support the consistency of the measures with section 8. The inspection and requirement powers would not be available to further a penal investigation. Rather, they would be available for regulatory purposes (to determine tax obligations or entitlements and to verify compliance with the Act) in the context of a self-assessment tax system. In these circumstances, privacy expectations are reduced. In the case of dwelling houses (places occupied as a residence) where privacy interests are heightened, inspectors would only be authorized to enter with the consent of the occupant or by a warrant issued by a judge. A warrant would also be required to search and seize records or things that are expected to afford evidence of the commission of an offence under the Act. The warrants issued under the Act would be obtained through judicial authorization on a reasonable grounds to believe standard, thus meeting the requirements under section 8 for a search or seizure to be reasonable.

Power to Seize Things for Non-Payment

The Act would introduce the power to seize things if the person fails to pay an amount required under the Act. The Minister would be required to give a 30-day written notice to enable the person to pay the outstanding amount and avoid having their items seized. The purpose of the seizure is to collect monies owed under the Act, rather than to take other steps that may interfere with privacy interests. The protection against unreasonable seizure under section 8 does not protect mere property interests.