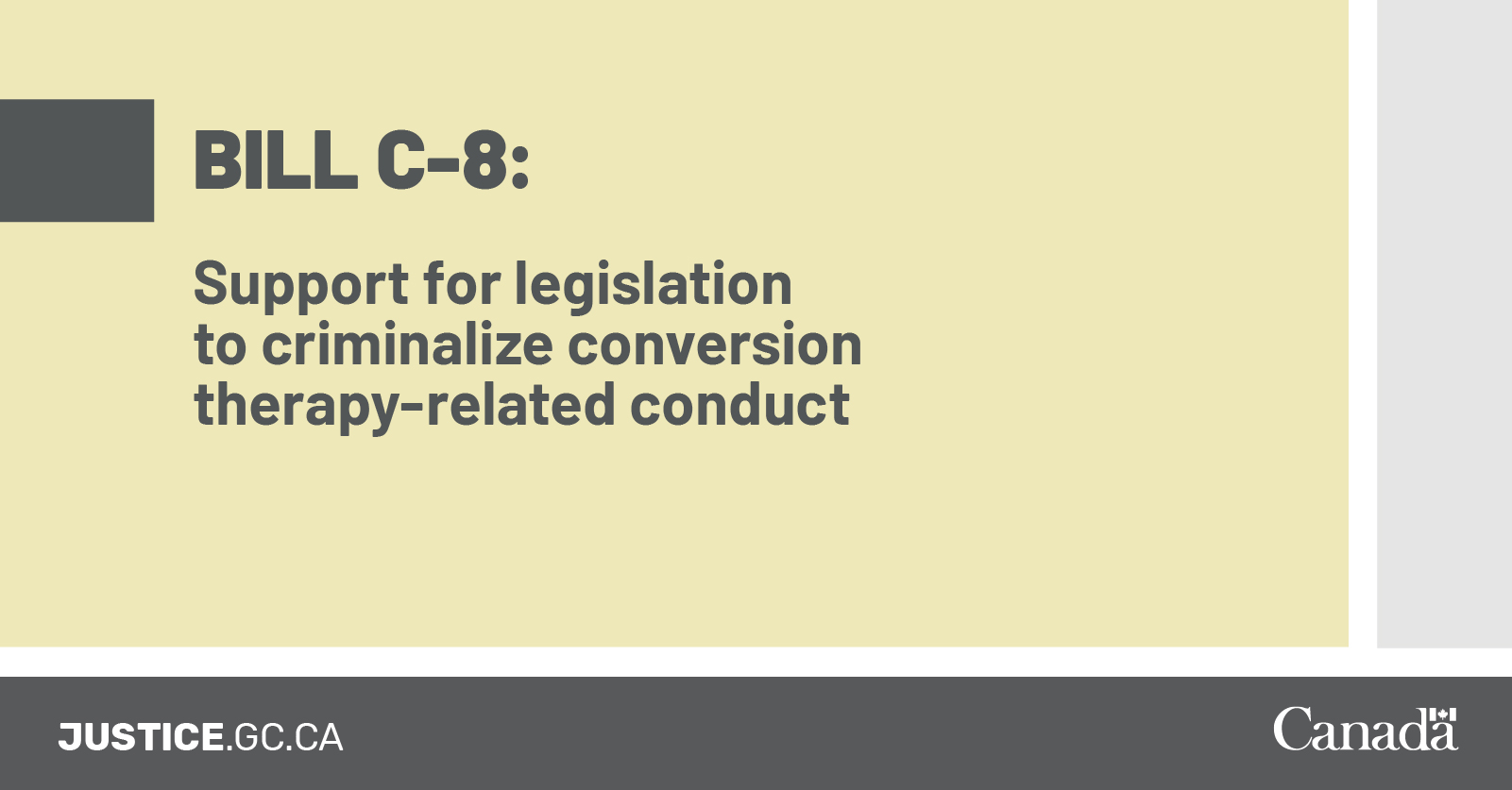 On March 9, 2020, the Honourable David Lametti, Minister of Justice and Attorney General of Canada, and the Honourable Bardish Chagger, Minister of Diversity and Inclusion and Youth, announced the introduction of new legislation to criminalize conversion therapy-related conduct in Canada.

Conversion therapy aims to change an individual’s sexual orientation to heterosexual, to repress or reduce non-heterosexual attraction or sexual behaviours, or to change an individual’s gender identity to match the sex they were assigned at birth. It harms and stigmatizes lesbian, gay, bisexual, transgender, queer and two-spirit (LGBTQ2) persons, undermines their dignity and negatively impacts their equality rights.

The proposed changes would protect the dignity and equality rights of all Canadians, in particular LGBTQ2 persons.

Quotes in support of Bill C-8

“Thank you @BardishKW and @DavidLametti for listening. We at @NoConversionCanada are all thankful and proud to stand with you all. You truly made me feel empowered to do this important step. Monumental.”

“This Bill is an important first step in that it’s shining a light on the practices. It’s really sending a clear message, particularly to parents and guardians and teachers, that this is not compatible with Canadian values.”

“Criminalizing conversion therapy is one of the strongest steps that any nation can take and it’s great to see Canada showing this leadership.”

“I’m very pleased that the government took this step. […] If you make it illegal to make money from offering this service, that will be one of the most effective ways it will be brought to a halt.”

"I think it’s an extremely good thing that they’re moving forward with taking action and banning this kind of harmful and destructive kind of therapy,"

“By introducing a bill which foresees a nationwide ban, the government of Canada has sent a powerful message – that LGBTIQ people are not in need of a change or cure.”

“Extremely proud of my fellow Canadians supporting LGBTQ2 youth. Conversion therapy has no place in my country @thebornperfect @NoConversionCA”

“What this bill does, which I applaud, is that it spreads that good work across the nation from coast to coast to coast. And I think that’s extremely important. Also sends out a much stronger message under the Criminal Code that this is detrimental. We’re talking about the suicide of children. We know that LGBTQ2+ children commit suicide at a far higher rate than straight children. So it’s about saving children’s lives. That’s what this Bill is about.”

“A heartfelt thank you to Minister David Lametti, Minister Bardish Chagger and the Government of Canada for introducing Bill C-8 today. This important, public safety legislation will begin to criminalize conversion therapy and save LGBTQ2+ lives throughout Canada. Most importantly: thank you to conversion therapy survivors. This is your movement, this is your fight and today you won. It is because of your courage, advocacy, persistence and willingness to speak up for what’s right that we now have these protections. We know there is a long road ahead but today we celebrate with pride. Today we made history.”

“CBRC is proud to stand in solidarity with survivors and advocates in support of new federal legislation tabled today to ban conversion therapy through changes to the Criminal Code. We’re excited to work with survivors, researchers, and community leaders in support of this federal ban, which will help save queer and trans lives across Canada.”

“I’m very happy to see that the government has advanced this bill quickly and we will work with them to make sure it achieves the goal of being the most comprehensive bill banning conversion therapy in the world. It’s an important bill for two reasons. One, it acknowledges that no one from my community needs fixing. That seems obvious to state, but many people do not believe that. So this sends a very clear signal from Canadian society, that no one needs fixing. The second part is that it acknowledges the harm that’s done when there’s an attempt to alter someone’s sexual orientation, their gender identity or their gender expression. This leads to depression, social isolation and often to self-harm. So it’s important that this bill move forward quickly and we’re pledging today to work with the government, as I said, to make sure it’s the most comprehensive and that it moves expeditiously through this Parliament.”

“Thank you to everyone who pushed for this to happen. This legislation, which is among the most comprehensive in the world, will protect our communities and future generations of #LGBTQ2 people from these heinous and harmful practices. #freetobeme”

Randy Boissonnault, former Special Advisor to the Prime Minister on LGBTQ2 issues and former Member of Parliament for Edmonton Centre

Janis Irwin, NDP Member of the Legislative Assembly of Alberta for Edmonton-Highlands-Norwood

“The Government of Newfoundland and Labrador is committed to embracing and celebrating the diversity of all people, as the principles of fairness, respect and equality remain at the forefront of how we govern. We support the Government of Canada’s steps to amend the Criminal Code to ban conversion therapy. The provincial government participates in a federal/provincial/territorial criminal justice working group that has recently been focusing on the issue.”

The Government of Newfoundland and Labrador