Eighteen years after he authored Canada's definitive textbook on legislative instruments made by governmental authorities – Executive Legislation – Keyes recently released an updated version. This is the introduction from that text.

The opinions expressed in the article are those of the author and do not necessarily represent the positions of the Department of Justice Canada or the Government of Canada. 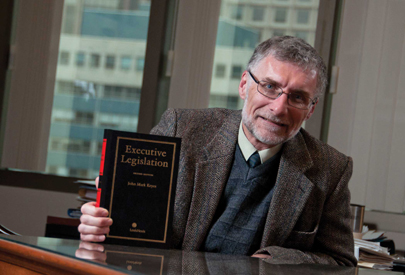 This book is about a form of law made by the executive branch of government in parliamentary democracies: executive legislation. This expression is a refinement of others commonly used to describe a somewhat broader category of written law: "delegated," "subordinate" and "subsidiary" legislation. These expressions also include law made by territorial governments, municipal or local authorities, professional associations and judicial rule-making bodies. These forms of law are made and promulgated quite differently from executive legislation. The courts have also treated them differently when reviewing their validity.

Executive legislation has a lengthy pedigree as a legal term of art dating back at least to the early 20th century when Fitzpatrick, CJ used it in one of the most important Canadian cases on this subject: Re Gray.Footnote 1 However, it has neither the visibility of statute law, nor the venerability of common law. It tends to be neglected by those who study parliamentary legal systems, typically consigned to a chapter at the end of texts on administrative or constitutional law. Yet, the impact of executive legislation on those who live under these legal systems is every bit as great, if not greater, than statute or common law.

Why this neglect? One answer may arise from its character as an amorphous body of legal instruments that vary immensely in their form, scope and subject matter. Executive legislation is largely a product of the modern regulatory state, a small garden at the back of the legislative process that has grown into a vast plantation. The great difficulty in studying it is to establish how it is, or should be, superintended by the legislators who plant it, tended by the officials who cultivate it and pruned by the judges who watch over it.

Limits on the exercise of executive legislative powers are generally divided into two groups: those that define the substantive scope of the powers and those that relate to the way in which they are to be exercised.Footnote 2

Part 3 deals with the substantive scope of executive legislation, the provisions that it may contain. They limit, for example, the matters that executive legislation may deal with, the purposes for which it may be made and the measures that it may embody. Although these constraints depend on the interpretation of enabling legislation, some, like those relating to unreasonableness, improper purpose or discrimination, are based on the presumed intent of the enabling legislation while depend on the particular wording of enabling or other related provisions.

Part 4 deals with constraints that are a hybrid of the other two groups. Although they relate to the content of executive legislation, they are largely driven by process requirements and focus on how much content must be included within the provisions of executive legislation. These constraints are discussed in terms of uncertainty, subdelegation and incorporation by reference.

The book concludes with Part 5, which looks at the mechanics of how executive legislation operates as well as the processes for its review by parliamentary bodies, courts and other tribunals.

(1918), 57 SCR 150: There are obvious objections of a political character to the practice of executive legislation in this country because of local conditions. But these objections should have been urged when the regulations were submitted to parliament for its approval, or better still when the War Measures Act was being discussed. Parliament was the delegating authority, and it was for that body to put any limitations on the power conferred upon the executive. I am not aware that the authority to pass these regulations was questioned by a vote in either house. Our legislators were no doubt impressed in the hour of peril with the conviction that the safety of the country is the supreme law against which no other law can prevail. It is our clear duty to give effect to their patriotic intention. (emphasis added)

This approach is recognized by Brennan, CJ in Project Blue Sky Inc. v. Australian Broadcasting Authority [1998] HCA 28 at [37-38]: A provision which directs the manner of the exercise of a power is quite different from a provision which prescribes an act or the occurrence of an event as a condition on the power - that is, a provision which denies the availability of the power unless the prescribed act is done or the prescribed event occurs. In one case, power is available for exercise by the repository but the power available is no wider than the direction as to the manner of its exercise permits; in the other case, no power is available for exercise by the repository unless the condition is satisfied. A provision which prescribes such a condition has traditionally been described as mandatory because non-compliance is attended with invalidity. A purported exercise of a power when a condition has not been satisfied is not a valid exercise of the power. A third kind of provision must be distinguished from provisions which restrict the ambit of the power and provisions which prescribe conditions on its availability for exercise. A provision may require the repository or some other person to do or to refrain from doing something (sometimes within a period prescribed by the statute) before the power is exercised but non-compliance with the provision does not invalidate a purported exercise of the power: the provision does not condition the existence of the power. Such a provision has often been called directory, in contradistinction to mandatory, because it simply directs the doing of a particular act (sometimes within a prescribed period) without invalidating an exercise of power when the act is not done or not done within the prescribed period. The description of provisions as either mandatory or directory provides no test by which the consequences of non-compliance can be determined; rather, the consequences must be determined before a provision can be described as either mandatory or directory.